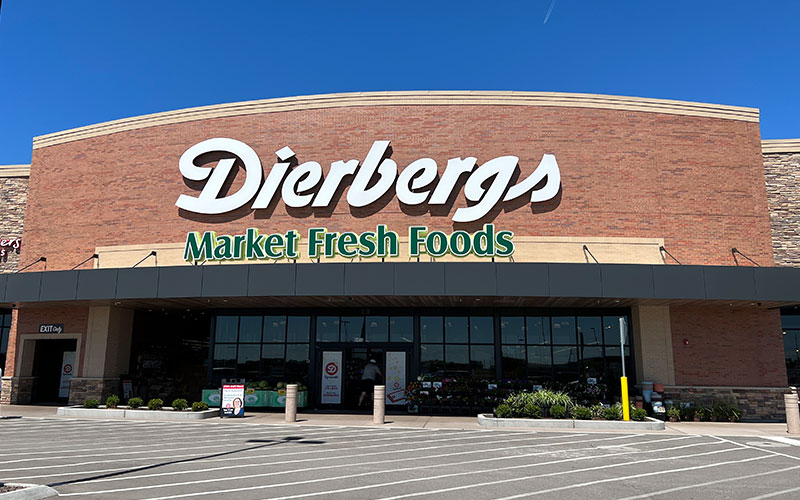 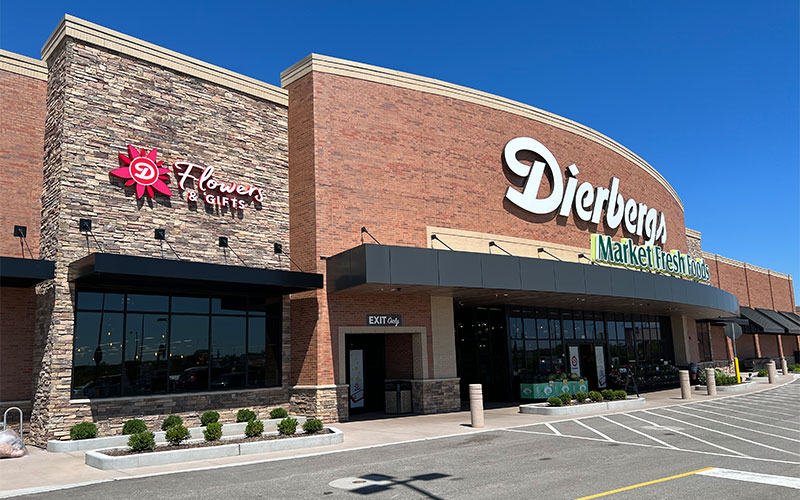 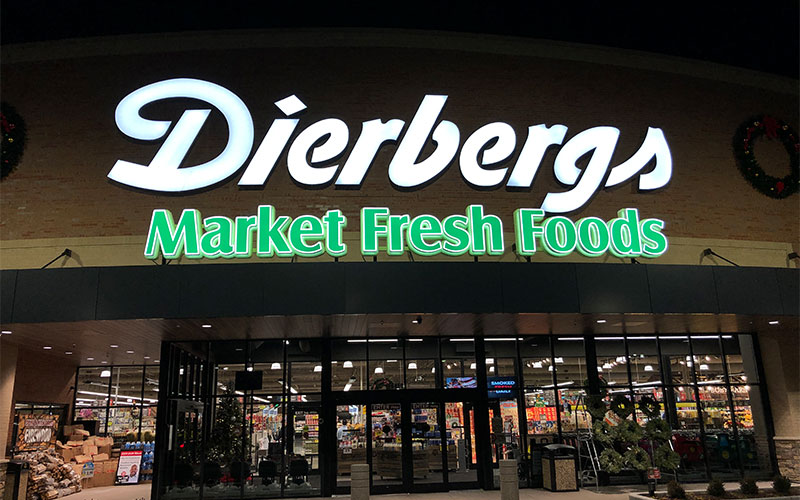 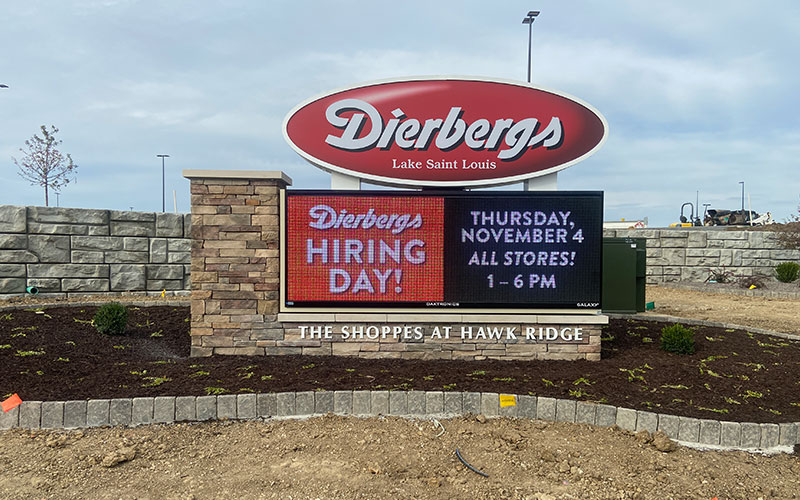 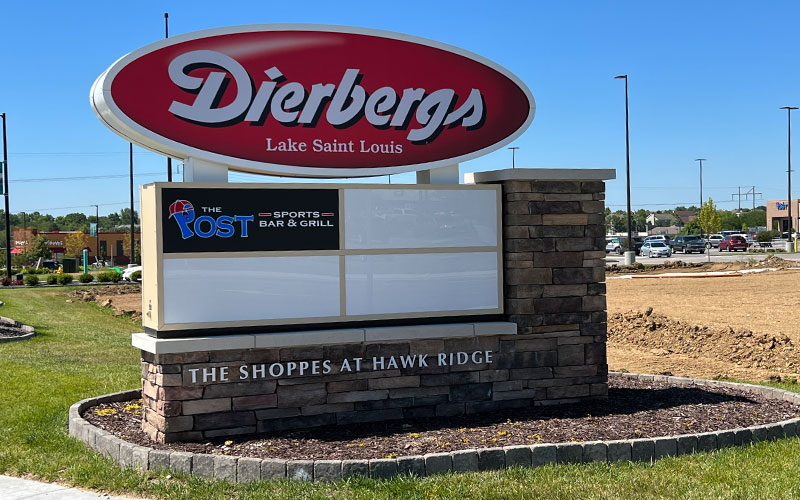 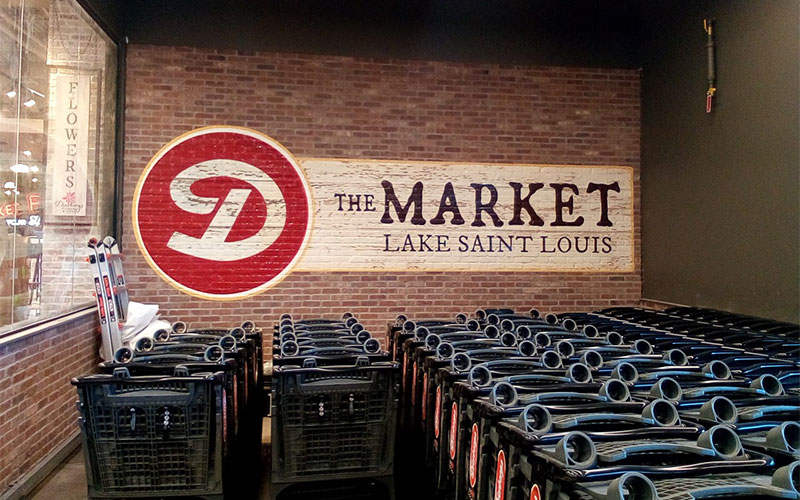 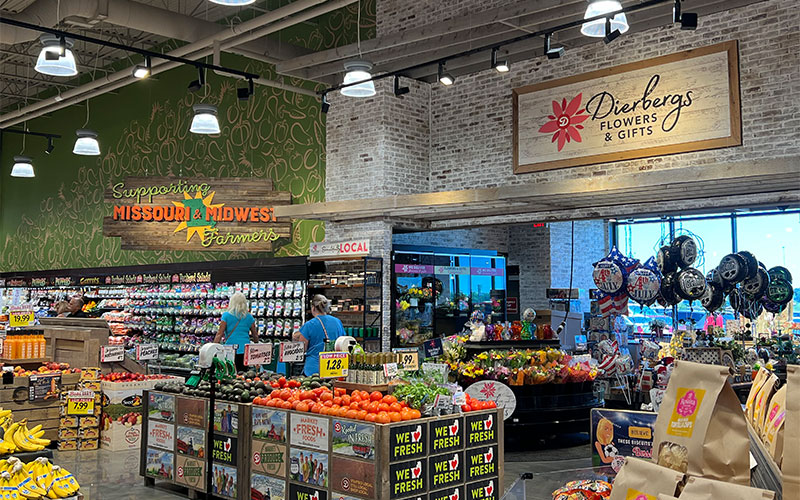 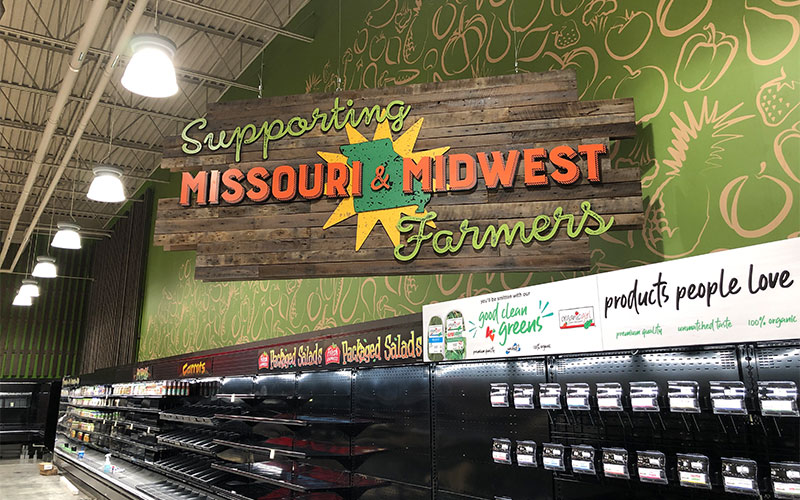 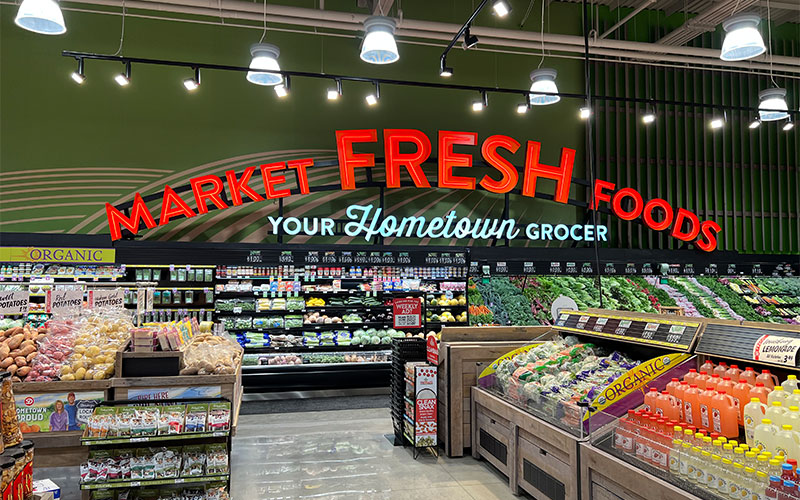 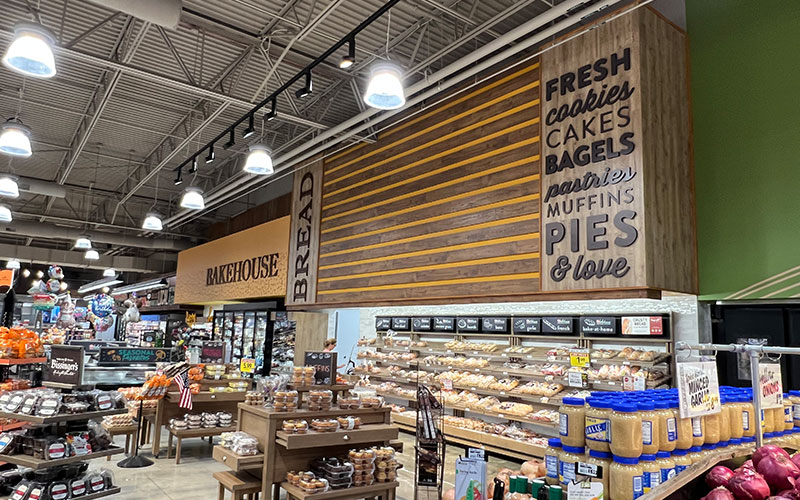 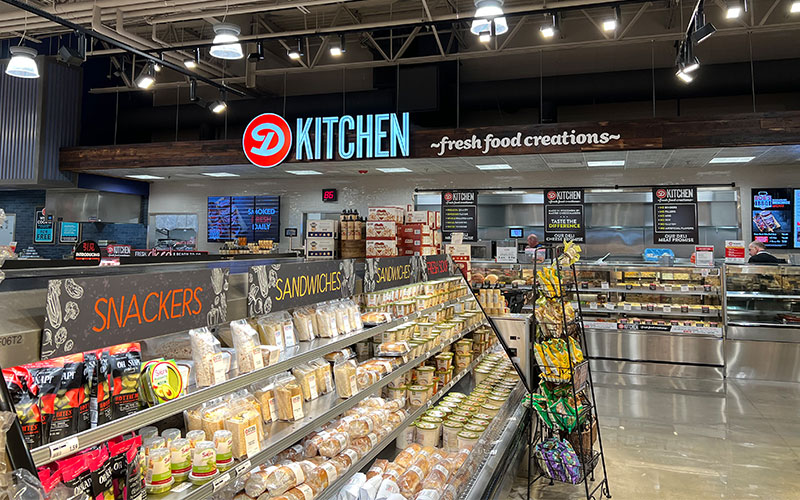 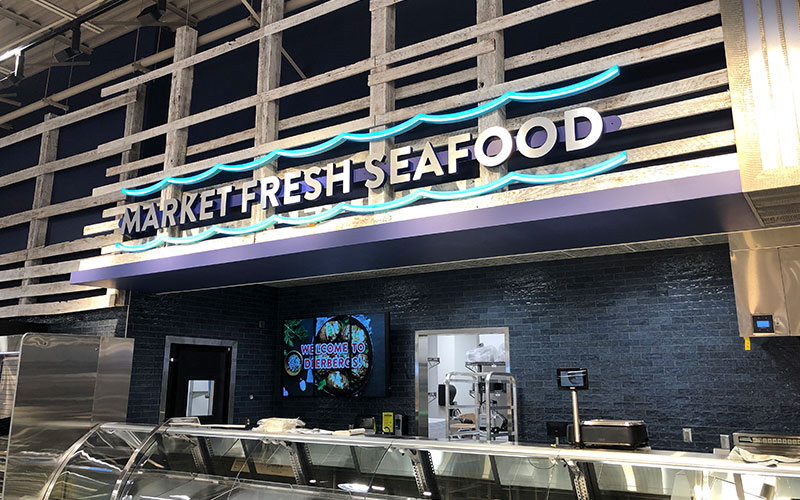 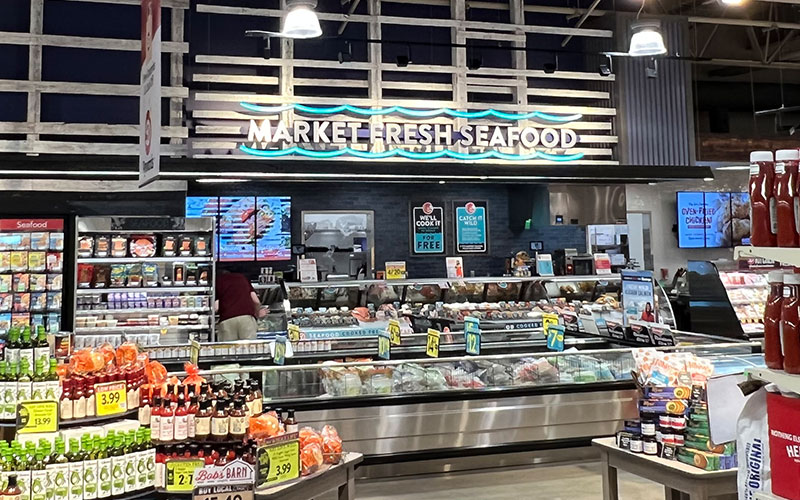 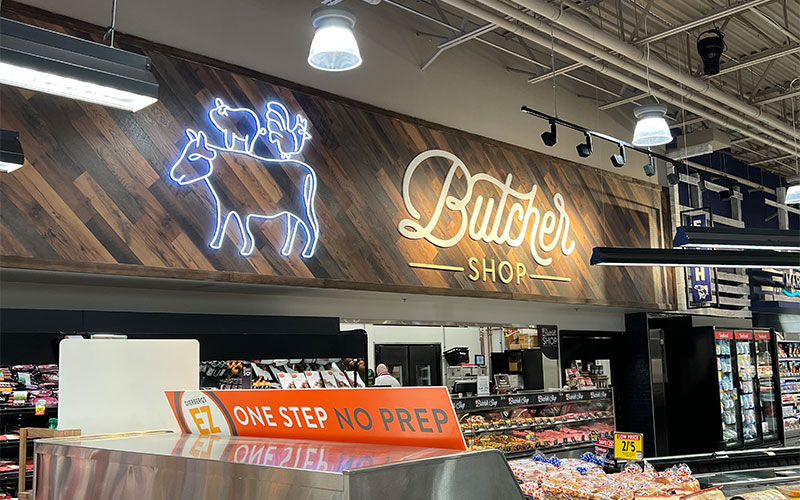 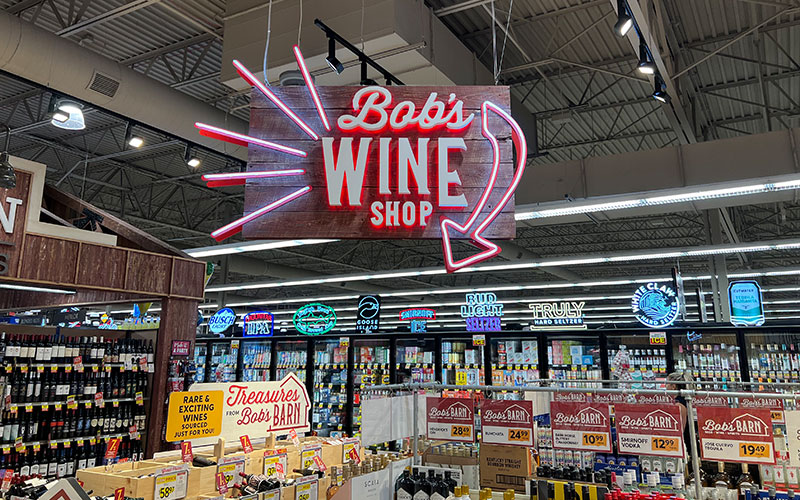 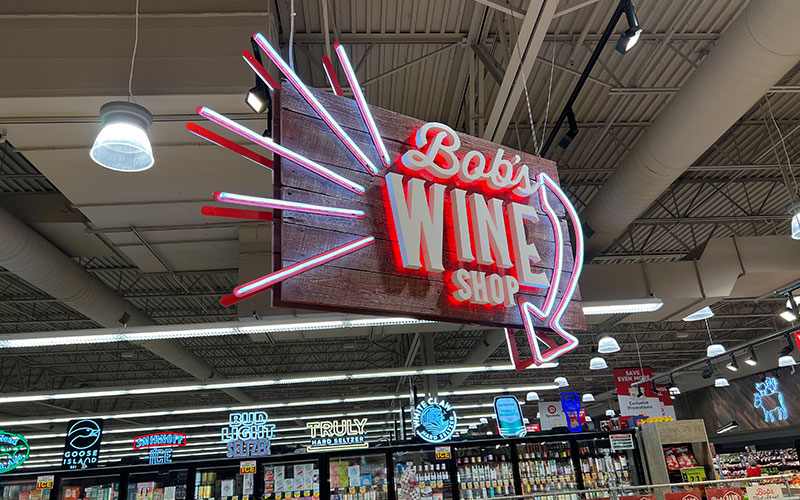 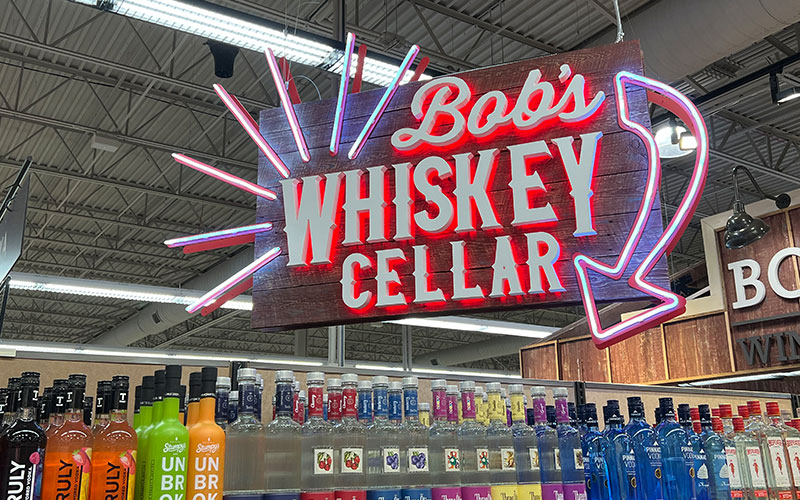 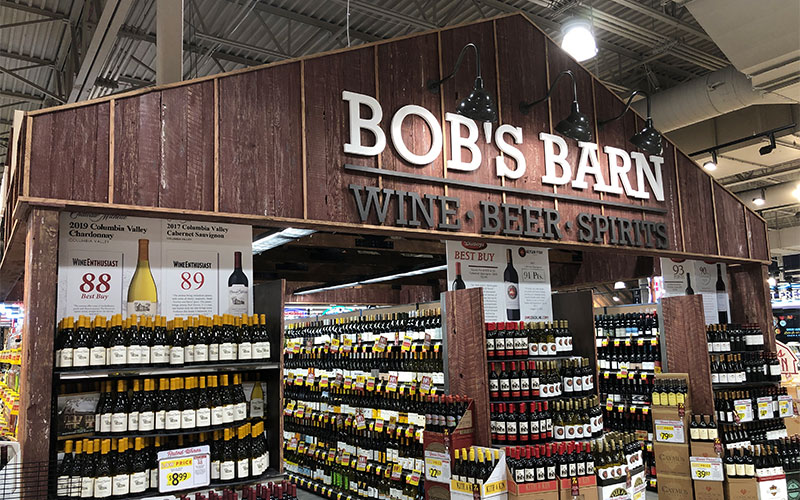 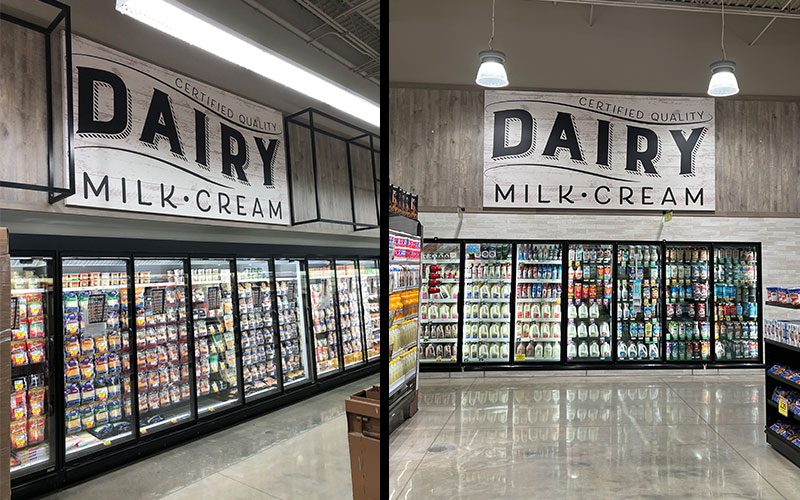 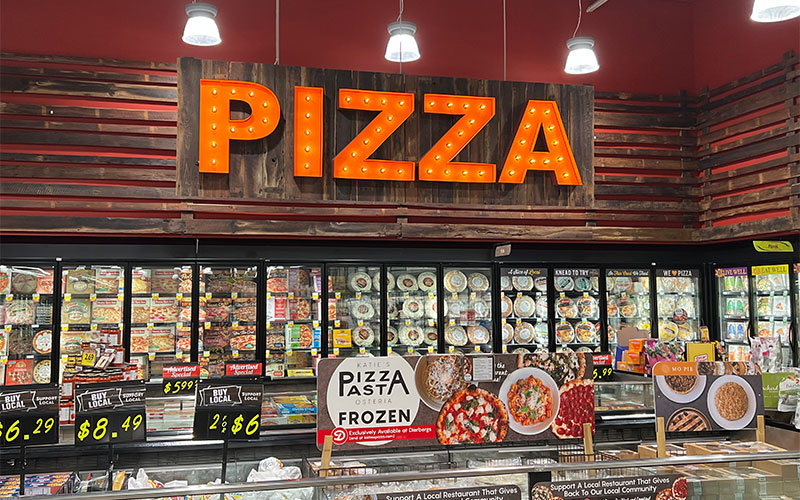 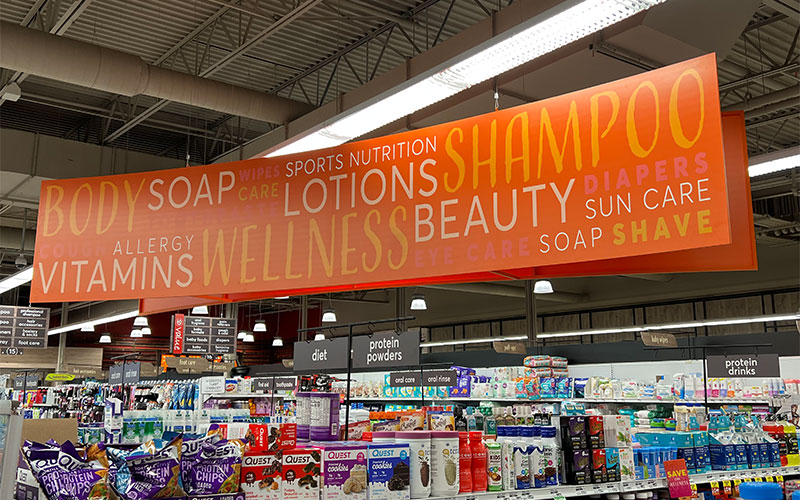 Ziglin Signs started working with Dierbergs on the Lake St. Louis signage package in July 2020, going over some of the permitting requirements and determining what size and type of signs were allowed.  The first order of business was to get the monument sign with the electronic reader board up and installed so they would be able to put messages on the sign to communicate with future customers about the store opening.  That sign was started in February of 2021 and completed in the summer.  The other exterior signage, including a second monument sign and all building signage was started later and finally installed in October 2021.  Interior signage was done in stages and also installed throughout September and October in order to be completed by the Grand Opening on November 2, 2021.

The main focus on the outside of the building was the Dierbergs channel letter sign, which had an overall size of 11’ tall by 45’ long over the main entrance complimented by a Market Fresh Foods sign that was mounted on top of the front canopy, just below the Dierbergs sign.

The Market Fresh Foods sign consisted of 42” tall letters and had an overall length of 35’ long.  The sign had front lit channel letters that also backlit onto a custom backer cabinet, creating halo lighting behind the letters.

For the interior sign package several new signs were created for this store to give certain areas a special wow factor.  A custom channel letter sign was built with retro channel letters that had LED bulbs mounted inside for the lighting.  The letters were mounted on a wood background using reconditioned barnwood.  Two signs were also created for the liquor department; one for Bob’s Whiskey Cellar and one for Bob’s Wine Shop. These signs were also mounted onto a reconditioned wood background panel and contained custom backlit channel letters with red halo lighting that shines onto the wood background, plus some exposed LED tubing to create an arrow and decorative lines.  The 3rd sign that stands out is a Market Fresh Foods sign that is 6’ tall by 32’ wide and consist of open face channel letters with LED border tubing inside for the Market Fresh Foods letters and front lit channel letters for “Your Hometown Grocer” letters.  All of the letters were mounted on a large radius frame painted black and mounted on top of coolers in the produce department.

There are hundred of other signs that were made and installed, some consisted of LED lighting, some fabricated out of aluminum sheeting and a majority were printed and routed out of various sizes and thicknesses of PVC material.  Production started in February on some of the exterior signs and the project wasn’t finished until the last week of October 2021, so it took about 8 months to finalize all of the sign designs, produce them and install them.

Your complete source for all your signage needs Contact Us Now