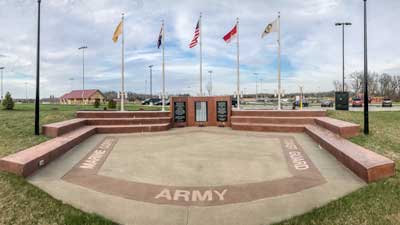 Washington company Ziglin Signs will step in to create and install the entrance sign at Veterans Memorial Park after the company originally hired has stopped all communication with the project manager.

Andrea Lohmeyer with Cochran was at a recent parks, buildings, development and public service committee to request a change order to allow Ziglin to complete the work. Ziglin was the second lowest bid, at $35,691.06.

Stewart Signs, located in Florida, was awarded a contract for the electronic sign with the low bid of $33,700 earlier this year.

The sign base is 8-feet wide and just over 7 feet 6 inches tall while on a base. The sign itself is 4 feet 6 3/4 inches tall and just under 8 feet wide.

It will feature an electronic message board with green trim and “Veterans Memorial Park” below the city logo set against a tan backdrop that is outlined in green.

Bid documents the company received in December stated that the sign needed to be completed by April 1.

Lohmeyer said she received a call asking for an extension to July and at that time, she told the company that a dedication was scheduled for May 7 and asked if it could be completed by then.

She was told the earliest was June. Since that time, the representative stopped all communication, failing to provide a new proposed date, Lohmeyer told the committee.

“This is a company that Kevin (Arand, parks director) has been in correspondence with for a year,” Lohmeyer said. “I was very surprised about the last week of events. They really put us in a difficult position.”

The company failed to return the contract, certificate of insurance and bonding documents, which voids the contract agreement.

Ziglin representatives said they would be able to complete the project by May 1, in time for the dedication of the memorial.